If you are unfamiliar with the nocturnal bird calls we are asking you to listen for (see below) we would like to direct you to the Cornell Lab of Ornithology.  Cornell has an excellent website set up where you can not only learn about the life histories of birds, but you can also learn their calls. The primary nocturnal birds you will want to learn if you would like to monitor in Illinois are listed below. 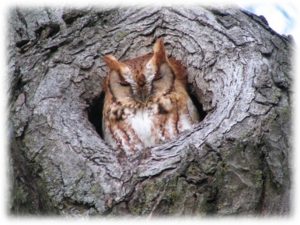